The first January 20th Inauguration Day was in 1937 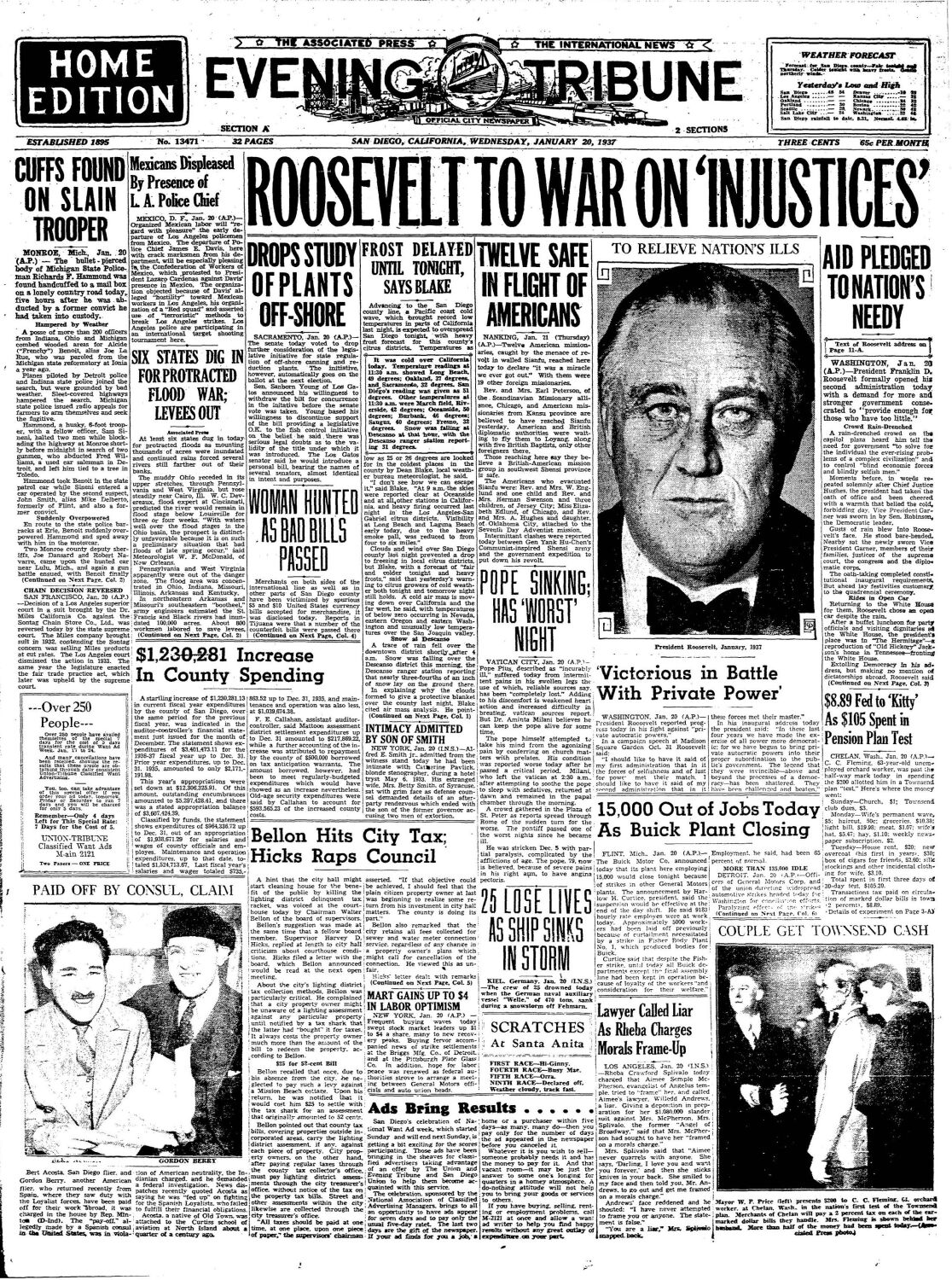 On Jan. 20, 1937, Franklin Delano Roosevelt was sworn into office at the U.S. Capitol for a second presidential term.

Roosevelt became the first U.S. president to be sworn in on January 20.

He also was the last president to be sworn in on the old inauguration day — March 4 — for his first term in 1933.

Passage of the 20th amendment to the constitution in 1933 moved the Presidential Inauguration Day from March 4th to January 20th. The 20th amendment also set Jan. 3 as the day to convene a new U.S. Congress in order put an end to the so-called lame duck session of Congress in which defeated officeholders stayed on for months after election day.

ROOSEVELT TO WAR ON ‘INJUSTICES’

WASHINGTON, Jan. 20 (A.P.)—President Franklin D. Roosevelt formally opened his second administration today with a demand for more and stronger government consecrated to “provide enough for those who have too little.”

A rain-drenched crowd on the capitol plaza heard him tell the need for government “to solve for the individual the ever-rising problems of a complex civilization”: and to control “blind economic forces and blindly selfish men.”

Moments before, in words repeated solemnly after Chief Justice Hughes, the president had taken the oath of office and been cheered with a warmth that belied the cold, forbidding day. Vice President Garner was sworn in by Sen. Robinson, the Democratic leader.

Gusts of rain blew into Roosevelt’s face. He stood bare-headed. Nearby sat the newly sworn Vice President Garner, members of their families, justices of the supreme court, the congress and the diplomatic corps.

The oath-taking completed constitutional inaugural requirements. But ahead lay festivities customary to the quadrennial ceremony.

Returning to the White House for them, Roosevelt chose an open car despite the rain.

After a buffet luncheon for party officials and visiting dignitaries of at the White House, the president’s place was in “The Hermitage”—a reproduction of “old Hickory” Jackson’s home in Tennessee—fronting the White House.

Extolling Democracy in his address, but making no mention of dictatorships abroad, Roosevelt said the American method had been made more powerful in the last four years.

“For we have begun,” he said, “to bring private autocratic powers in their proper subordination to public government.”

Ten he pictured millions of poverty-chained people living under “the pall of family disaster” and avowed determination to attack “cancers of injustice.”

Cheers rose from he crowd as he paused, and then said in grim tone: “We are determined to make every American citizen the subject of his country’s interest and concern.”

The storm drove many of those who had come to hear him away before the ceremonies. Similarly, while arrangements had been made for tens of thousands to watch the military parade to follow, Pennsylvania ave. looked comparatively deserted for long stretches, compared with other inauguration days.