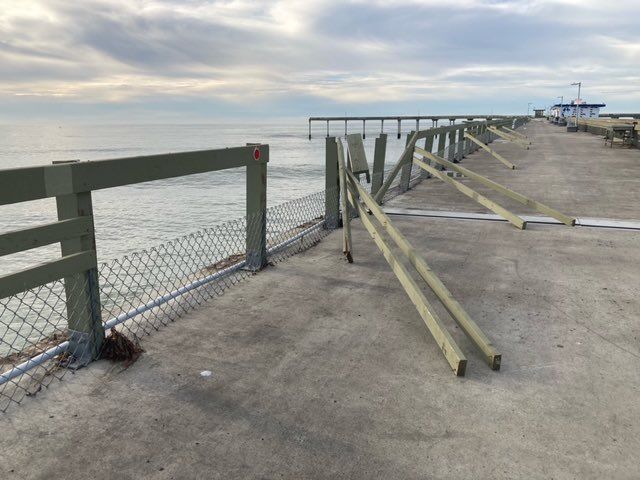 The Ocean Beach pier, damaged in places in last week’s stormy weather, will stay closed to the public until further notice.

It could take weeks for crews to assess the damage and make repairs so it is safe, said San Diego lifeguard Lt. Rick Romero.

“That’s going to be out of commission for a couple of weeks, if not more,” Romero said. “We got hit pretty good. The swell we had was pretty significant, something we haven’t had, as far as size-wise, in a long couple of years.”

The storm damaged some guardrails on the pier along with plastic pipes that contain the pier’s electrical wiring, Romero said.

Repairs won’t start until the water is calmer, Romero said.

“It’s going to take some time for city crews to go out there, reassess it, get all the fixes done. And we also have another swell coming in on Tuesday,” he said. “It’s not going to be as big, but we’ll have definitely some surf still. So nothing really gets done until the surf drops.”

On Jan. 6, the heavy surf and tides tore apart some of the guardrails, and in some places uprooted wooden posts from the concrete, according to a tweet from San Diego Fire-Rescue.

The pier was closed on Thursday, about the time the first huge sets started rolling in during last week’s stormy weather. One of the largest ocean swells to hit San Diego County in years produced 10- to 12-foot waves in many spots last week, according to the National Weather Service and San Diego lifeguards. At the La Jolla’s Children’s Pool, waves also damaged a safety railing on the pool’s breakwater.

At 1,971 feet, the Ocean Beach Municipal Pier is the longest concrete pier on the West Coast, according to the City of San Diego. In 2019, the pier was shut down for several months after damage from a winter storm. San Diego public works crews made $430,000 in emergency repairs.

City officials are in the process of evaluating long-term solutions to preserve the popular attraction, including options to design and build a replacement of the structure, which consultants in 2019 determined had exceeded its service life.

In October, the San Diego City Council approved the $8 million contract with Long Beach-based engineering consultant Moffatt & Nichol for a study to begin the planning process for replacing the pier. Plans call for construction of a new pier to begin by 2026.