LOS ANGELES, Calif. /California Newswire/ — On Tuesday, November 15, 2022 a majority of the Los Angeles Unified School Board voted to begin a process some fear would dismantle an oversight Committee that has been in place for decades ensuring the globally celebrated environmental policy was implemented according to the district’s policy and California’s Healthy Schools Act. In its place the Board is recommending establishing an Ad Hoc Committee, says celebrated children’s environmental health non-profit California Safe Schools. 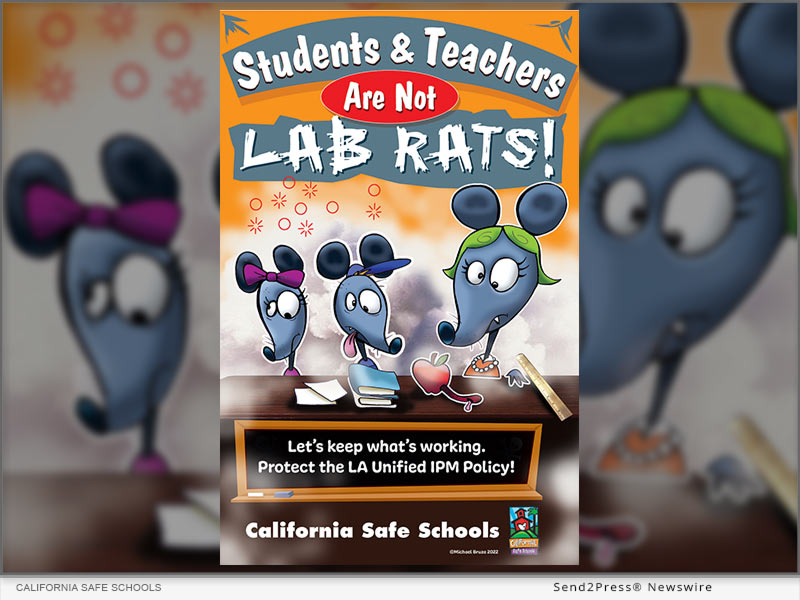 Concerned members of the public that included members of the Oversight Committee who signed up in advance to speak, were repeatedly disconnected, not called upon, or were unable to connect on the district’s dedicated phone line.

In spite of the district acknowledging technical problems, they proceeded ahead. As a result a notice of Brown Act Violation was filed, with a request to have the Board add the item to the next Board Meeting to ensure the public had an opportunity to express their deep concerns about the misguided process.

The Los Angeles Unified Integrated Pest Management Policy (IPM) was unanimously adopted by the School Board in March of 1999 following a year-long drafting of a more protective policy. This effort was prompted after elementary school students were sprayed with pesticides by a school gardener in a hazardous materials suit as they walked into their classrooms.

“My six-year-old son had a reaction to the toxic cloud, which resulted in a severe asthma attack. Fortunately, he recovered and the Board immediately authorized district staff, members of the public, parents, medical experts, scientists, United Teachers Los Angeles (UTLA) and environmentalists to work together to craft a more protective policy. The result was the creation of the most stringent pesticide policy for schools in the nation. It was the first policy to embrace the Precautionary Principle and the Right to Know with regard to the application of pesticides in the Los Angeles Unified School District (LAUSD)”, said Robina Suwol, Executive Director of California Safe Schools.

The success of the policy led to California legislation, The Healthy Schools Act, and later AB 405 (Montanez) which prohibits the use of experimental, conditional or phased out pesticides at all California K-12 schools. Today, the policy has become a national and international model for school districts and communities.

But recent actions by the LA Unified Maintenance and Operations Management, coupled with misrepresentation from them to the LA Unified Board, may undermine the ability of the IPM Committee to oversee the IPM Policy. This includes canceling publicly noticed meetings and limiting the independence, diversity and impartiality of the appointed Committee members. We are opposed to these efforts as they weaken the very oversight mechanisms that have enabled the meaningful implementation of the IPM Policy.

The recent audit of the IPM Program, completed June 29, 2022, includes troubling recommendations that would eliminate the ability of the public representatives on the Committee to self-appoint members most representative of their group and replace those members with individuals hand-picked by Maintenance and Operations or others. Such a change is in direct conflict with the IPM Policy.

Additionally, the audit’s recommendation of term limits without the ability of public groups to select their representatives would eliminate members with vast experience in upholding the IPM Policy and knowledge of institutional history essential to understanding the successes and challenges of years past.

​Further troubling was the abrupt decision to cancel the publicly-noticed meetings beginning July 8, 2022, and “all further meetings until further notice”, without sufficient notice or explanation. Meetings for the IPM Committee are required by the IPM Policy to be held monthly. In the past 24 years, only one meeting has been cancelled because of weather conditions. Due to the recent pandemic, the meetings have been held online on the second Friday of each month.

​There are other serious issues the IPM Committee is currently addressing, including:

1 – District use of an unauthorized and unapproved agricultural pesticide product on school campuses.

2 – The June audit revealing widespread violation by the District of its own IPM Policy and the Healthy Schools Act.

3 – Increased pest activity due to failure to address issues in a timely fashion.

4 – Reports related to the lack of needed supplies to properly address pest issues.

Executive Director of California Safe Schools Robina Suwol added, “The IPM Committee meetings must continue as publicly noticed in order to properly address the issues and ensure compliance with the IPM Policy, which over the years has set the gold standard in keeping our children, teachers and all school stakeholders safe from pesticide exposure.”

Over the years, the LAUSD went from using 160 products to fewer than 25 – many of which have never been used. Additionally, Round Up and any other herbicides have also not been used on any Los Angeles Unified school grounds for more than 20 years. This has resulted in Los Angeles Unified avoiding the lawsuits that other districts experienced and has protected the health and safety of countless students, faculty, staff and parents.

​”The IPM Committee must be permitted to continue its work to oversee and implement the IPM Policy without further interference or efforts to weaken the inherent internal mechanisms that protect the independence, diversity and impartiality of the IPM Committee and its important oversight role,” said Sandra Schubert, Esq., Advisory Board Member California Safe Schools.

California Safe Schools (CSS) is children’s environmental health and environmental justice non-profit committed to ensuring that all students, teachers, staff, and community members who live near school sites are in a safe, toxic-free environment. CSS works closely with diverse communities and regulatory agencies on toxic issues (air, water, soil). CSS achieved national prominence by spearheading the Los Angeles Unified School District’s Integrated Pest Management (IPM) Policy, the most stringent pesticide policy in the nation for K-12 public schools. This was the first school district to embrace the “Precautionary Principle” and “Right to Know” in a policy and led to the passage of California’s Healthy Schools Act. Today, the LA Unified IPM policy serves as a national and international model for school districts and communities.