From the Archives: San Diego banned AIDS discrimination 35 years ago 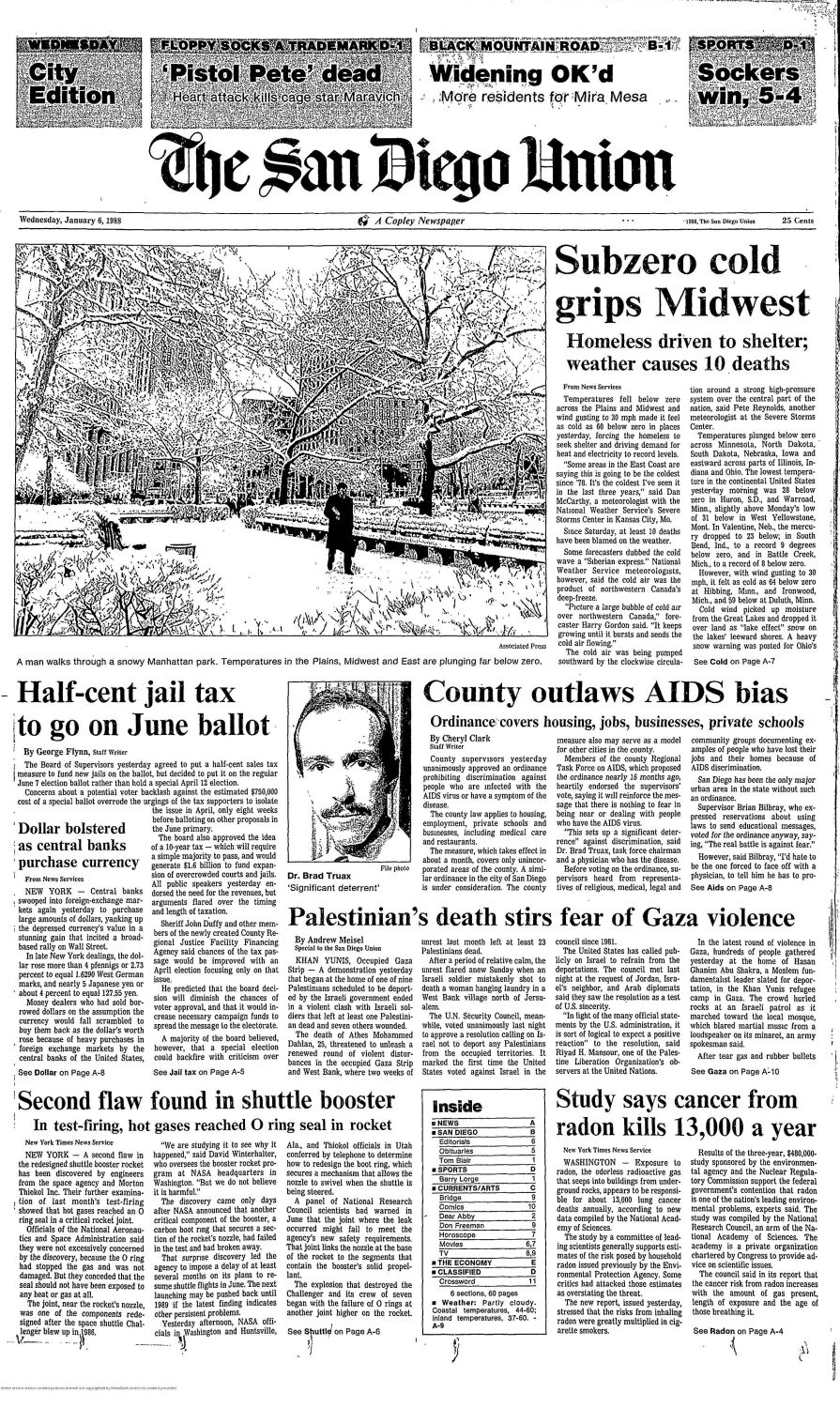 In January 1988, County Board of Supervisors adopted a wide-ranging proposal banning discrimination in against anyone who has HIV/AIDS. The City Council approved a similar anti-discrimination measure the following month. San Diego had been the only major urban area in the state without such an ordinance.

County supervisors yesterday unanimously approved an ordinance prohibiting discrimination against people who are infected with the AIDS virus or have a symptom of the disease.

The county law applies to housing, employment, private schools and businesses, including medical care and restaurants.

The measure, which takes effect in about a month, covers only unincorporated areas of the county. A similar ordinance in the city of San Diego is under consideration. The county measure also may serve as a model for other cities in the county.

Members of the county Regional Task Force on AIDS, which proposed the ordinance nearly 16 months ago, heartily endorsed the supervisors’ vote, saying it will reinforce the message that there is nothing to fear in being near or dealing with people who have the AIDS virus.

“This sets up a significant deterrence” against discrimination, said Dr. Brad Truax, task force chairman and a physician who has the disease.

Before voting on the ordinance, supervisors heard from representatives of religious, medical, legal and community groups documenting examples of people who have lost their jobs and their homes because of AIDS discrimination.

San Diego has been the only major urban area in the state without such an ordinance.

Supervisor Brian Bilbray, who expressed reservations about using laws to send educational messages, voted for the ordinance anyway, saying, “The real battle is against fear.”

However, said Bilbray, “I’d hate to be the one forced to face off with a physician, to tell him he has to provide services. It’s going to be tough.”

The national Centers for Disease Control in Atlanta estimates that between three and 10 times that number are infected with the virus, but show no symptoms.

The ordinance prohibits employers from refusing to hire any person who has acquired immune deficiency syndrome, or is infected with the virus that causes the disease.

It becomes illegal for any business — such as a medical practices, stores or restaurants — to refuse service to a person who has the disease or is infected with the virus. It also applies to actions by landlords, real estate brokers, associations and corporations, labor organizations and legal representatives.

The measure also prohibits anyone from requiring a person to take any test or undergo a medical procedure designed to determine if that person has AIDS or carries the virus.