From the Archives: Pueblo crew released by North Korea Dec. 23, 1968 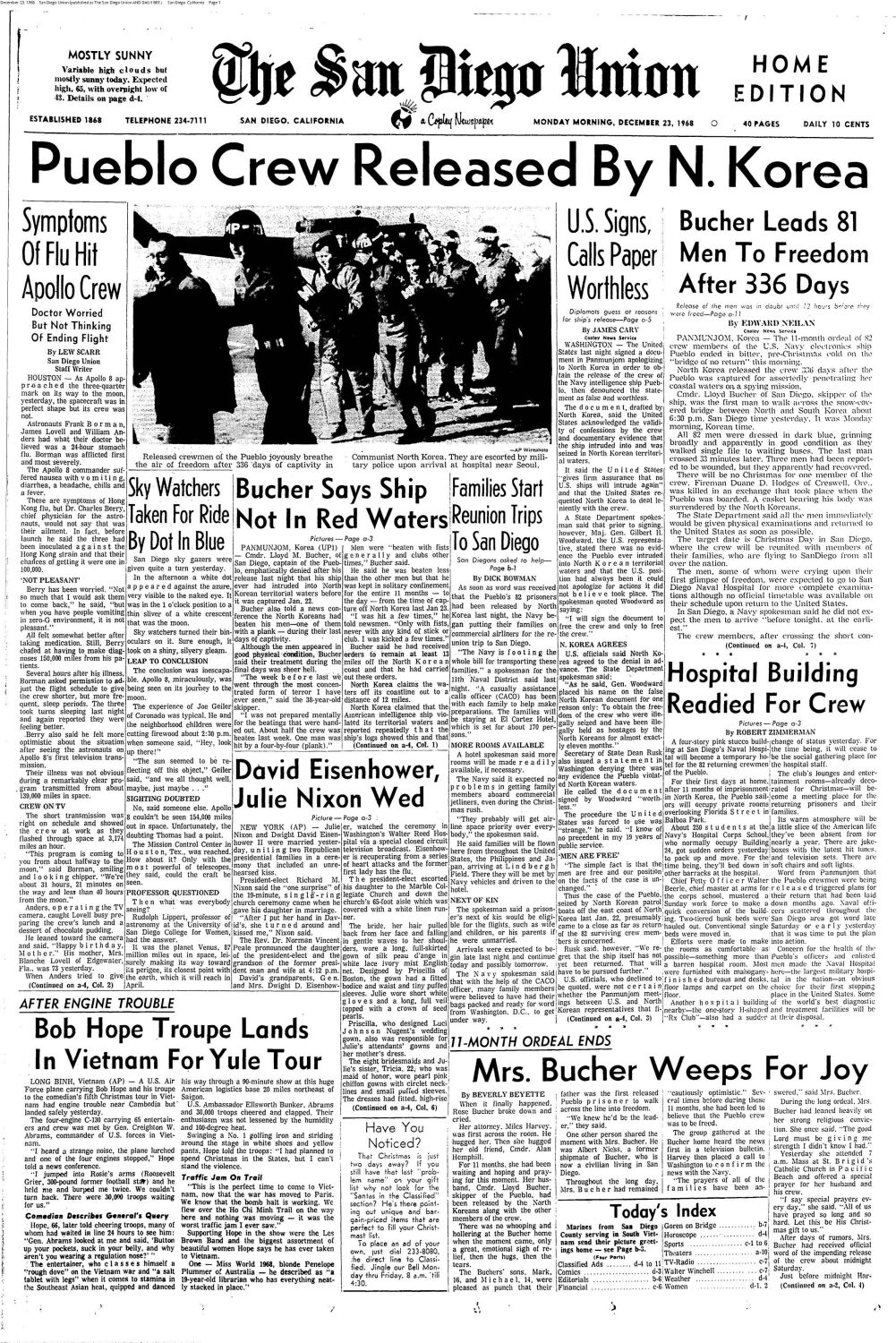 On Dec. 23, 1968 Commander Lloyd M. “Pete” Bucher, captain of the USS Pueblo, and 81 other surviving crew members of the U.S. intelligence ship, were released by North Korea after 11 months of captivity and torture.

PANMUNJOM, Korea —The 11-month ordeal of 82 crew members of the U.S. Navy electronics ship Pueblo ended in bitter, pre-Christmas cold on the “bridge of no return” this morning.

North Korea released the crew 336 days after the Pueblo was captured for assertedly penetrating her coastal waters on a spying mission.

Cmdr. Loyd Bucher of San Diego, skipper of the ship, was the first man to walk across the snow-covered bridge between North and South Korea about 6:30 p.m. San Diego time yesterday. It was Monday morning, Korean time.

All 82 men were dressed in dark blue, grinning broadly and apparently in good condition as they walked single file to waiting buses. The last man crossed 33 minutes later. Three men had been reported to be wounded, but they apparently had recovered.

There will be no Christmas for one member of the crew. Fireman Duane D. Hodges of Creswell, Ore., was killed in an exchange tat took place when the Pueblo was boarded. A casket bearing his body was surrendered by the North Koreans.

The State Department said all the men immediately would be given physical examinations and returned to the United States as soon as possible.

The target date is Christmas Day in San Diego, where the crew will be reunited with members of their families, who are flying to San Diego from all over the nations.

The men, some of whom were crying upon their first glimpse of freedom, were expected to go to San Diego Naval Hospital for more complete examinations although no official timetable was available on their schedule upon return to the United States.

In San Diego, a Navy spokesman said he did not expect the men to arrive “before tonight, at the earliest.”

The crew members, after crossing the short concrete bridge, were transported to the 121st Army Evacuation Hospital at Ascom City, 10 miles from Seoul.

The Pueblo crew had been described in a North Korean radio report last night, Korean time, as being jubilant when informed they would be free in hours.

Despite the cold and snow, there was nothing observers could see when the crew arrived at the “bridge of no return” to contradict that report. The men obviously were happy to be freed after almost a year of confinement in North Korea.

Although congressional sources confirmed Friday that an agreement had been reached and only details had to be worked out to free the men, there was a wait-and-see attitude among officials in Washington.

As the weekend progressed, it appeared that the timing of the transfer and the wording of a statement North Korea demanded as a condition of the release were paramount in the final stages of the negotiations.

Even then, last-minute bickering at a final meeting yesterday of U.S. and North Korean negotiators delayed the actual release by about one-half hour.

Then came the first official word that the men would be released.It came in the form of a terse communique released by State Department spokesman Robert J. McCloskey in Washington, which read:

“A meeting was held at Panmunjom last night. The crew of the Pueblo is scheduled to be released at 9 p.m. (EST). Until then, we will have nothing more to say.”

As the day progressed, the United States released more details on events leading up to the actual transfer of the men.

One point appeared clear: The North Koreans intended to retain the Pueblo and whatever electronic devices they captures.

The Pueblo was rigged with advanced electronic gear to listen for radar emission. By pinpointing the origin of such signals, the United States and South Korea could update information on North Korean air power.

The Pueblo, which sailed out of Sasebo, Japan, Jan 11, sought to avoid detection by shutting off its radios.

However, on Jan. 22, 1 North Korean subchaser signaled: Heave to or I will open fire.”