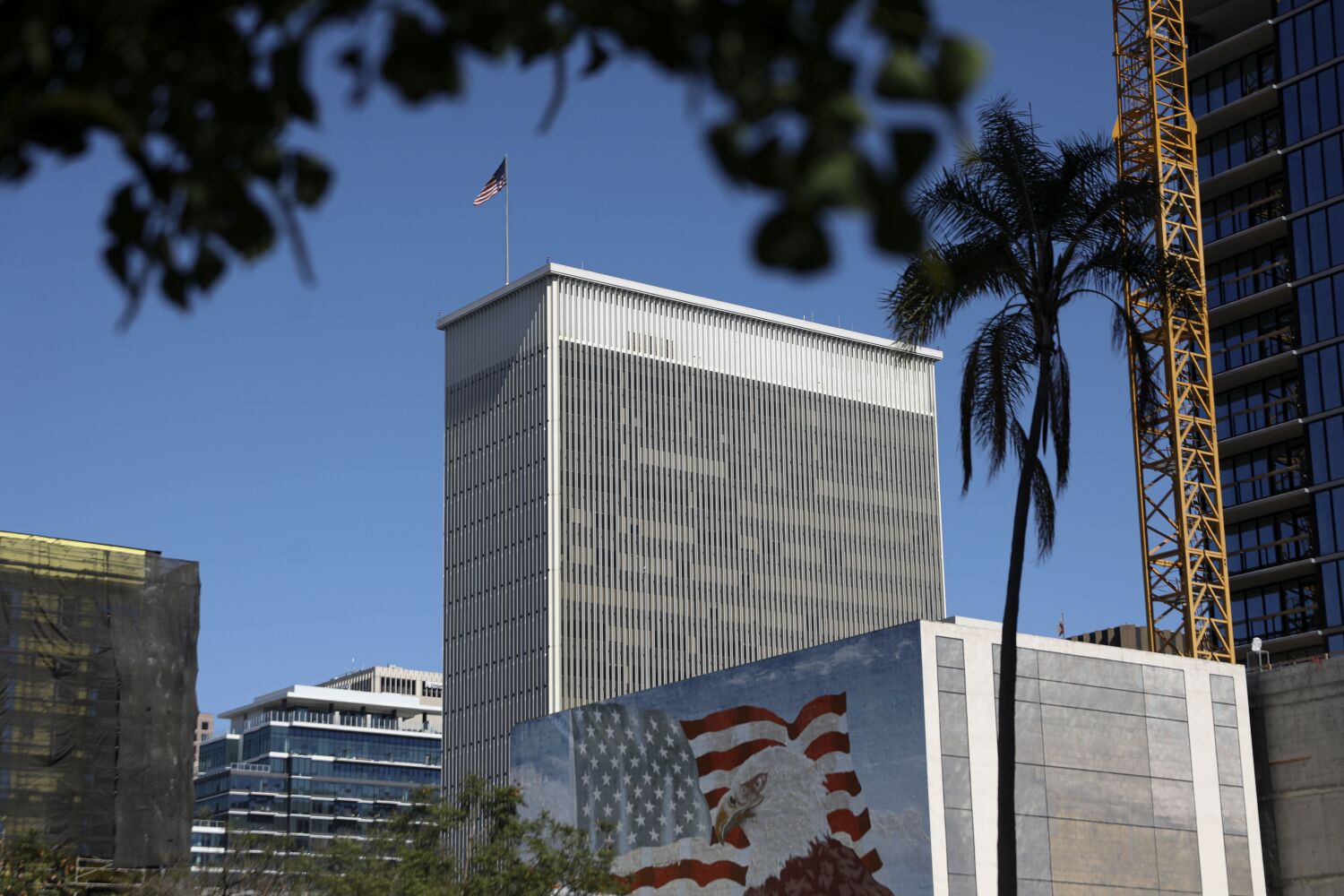 For the third time in recent months, Superior Court Judge Joel Wohlfeil has agreed to dismiss a key defendant from a taxpayer‘s lawsuit over the city of San Diego’s costly acquisition of an uninhabitable downtown office tower.

In a tentative ruling issued ahead of a hearing scheduled for Friday, the judge released 101 Ash LLC from the civil fraud complaint brought by San Diego restaurant consultant John Gordon.

The limited liability company was created by Cisterra Development, which shared millions of dollars in profits with broker Jason Hughes under a deal that came to light in 2021, five years after the lease-to-own agreement was reached.

If the initial ruling stands, no defendants will be left in the case, and the allegations will not be presented to a jury.

Wohlfeil said the lawsuit — which was filed in 2020 and had been scheduled for trial this year — was moot because of the city‘s agreement last summer to settle its own litigation against Cisterra and its lender, CGA Capital of Maryland.

“It is undisputed that on July 26, 2022 the San Diego City Council approved the terms of a settlement that terminates the 101 Ash lease,” the judge wrote in the preliminary ruling.

“Although the plaintiff ‘disputes’ the propriety of these transactions, it is nonetheless undisputed that they occurred,” he wrote.

Cisterra lawyer Michael Riney did not respond Thursday to a request for comment.

The legal team representing Gordon, which already has said it plans to appeal the dismissals, declined to comment in advance of the hearing.

Over the last months of 2022, Wohlfeil dismissed two other defendants — both the city and CGA Capital’s trustee, Wilmington Trust — from the Gordon litigation.

The trio of dismissals, the latest of which is likely to be upheld after the hearing Friday, comes in the wake of the $132 million settlement of two lawsuits brought by City Attorney Mara Elliott.

The settlement was negotiated by Mayor Todd Gloria and approved by a majority of the City Council, even though Elliott had said it was lopsided and should be rejected.

Gloria said the settlement was a good deal because it provided legal certainty to the city. His administration is planning a major redevelopment of the civic core area.

It also granted full indemnification to both Cisterra and CGA Capital, meaning that San Diego taxpayers are responsible for legal costs related to the lease-to-own contracts.

In 2021, Hughes publicly acknowledged receiving $9.4 million in fees for his work on the two transactions. Both Gloria and Elliott said they did not know that Cisterra and Hughes each made millions off the leases.

Cisterra and Hughes, who had previously served as an informal mayoral adviser, both said they did nothing wrong and defended the leases as good investments for the city.

Hughes said he informed at least six different city officials that he would seek to be paid for his work advising the city. He provided as evidence a letter he sent to then-real estate director Cybele Thompson in 2014, which she accepted and signed.

The co-founder of the Hughes Marino real estate brokerage remains a defendant in the two lawsuits filed by the City Attorney’s Office. Those cases are scheduled for trial later this year.

Both the Ash Street and Civic Center Plaza transactions are also being investigated criminally by District Attorney Summer Stephan, although the case has been open for nearly two years.

First filed in 2020, the Gordon lawsuit alleged that the Ash Street lease violated the state constitution by indebting the city for two decades without the benefit of a public vote.

In Thursday’s tentative ruling, the judge rejected that claim, finding that the city received a reasonable benefit in exchange for its $535,000 monthly lease payments even though the building has been unusable for years due to asbestos and other conditions.

“Although plaintiff may object to the city entering into the subject lease, this was a discretionary act and, as discussed above, does not constitute ‘waste’ of public funds as a matter of law,” Wohlfeil wrote.

The tentative ruling, which could still be amended or reversed, said the city’s decision to resolve its own claims against Cisterra and CGA Capital’s trust made the allegations in the Gordon complaint all but obsolete.

“Moot cases are those in which an actual controversy did exist but, by the passage of time or a change in circumstances, ceased to exist,” the judge ruled.

The 19-story Ash Street building was appraised at $67 million before the city approved the lease in 2015. The City Council was told the office tower needed only a $10,000 power wash before 1,000 or more employees could move in.

A consultant later found that the building needs more than $115 million in repairs before it could be safely occupied.

The Mayor’s Office told the council before the $132 million settlement was approved that the value of the Ash Street property was “virtually zero” due to the required upgrades.

Meanwhile, the $175 million the city agreed to borrow to pay off the two leases and other deferred capital projects will cost almost $350 million to repay over the next 30 years.

The judge may uphold his tentative ruling at the conclusion of the Friday afternoon hearing, or he could take the matter under submission and issue a final decision later.