SAN FRANCISCO, Calif. /California Newswire/ — Azarus has expanded its reach as the pioneer of livestreaming interactivity with a new Overlay Games platform allowing streamers to play along with their fans live and earn rewards. 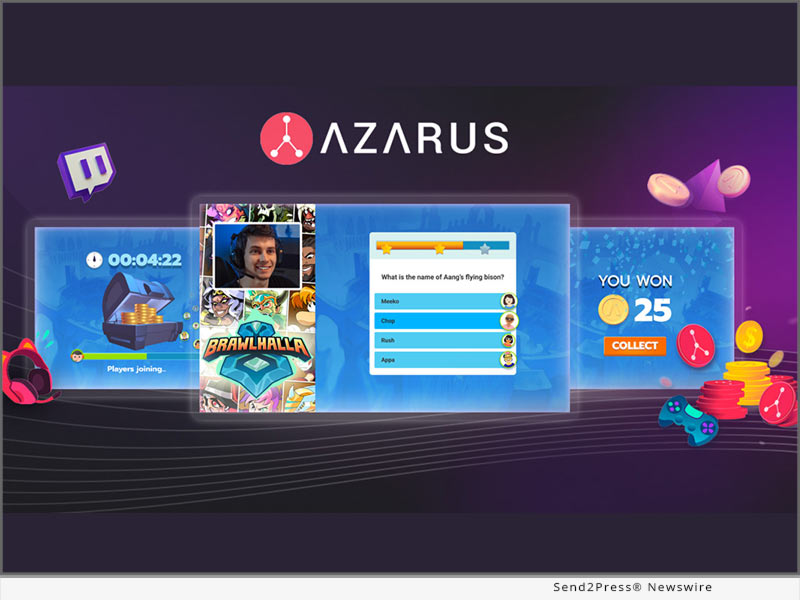 Founded in 2018, Azarus is rolling out an upgrade to its Overlay Games platform to enable streamers and brands to activate massive live audiences through Overlay Games on any streaming platform. Viewers of a stream become gamers and are rewarded for their attention and participation through AzaCoins, which are redeemable in the Azarus Store for more than 35,000 digital items, including popular premium video games and currency in popular free-to-play games.

This new platform is a pivotal milestone for Azarus, which has been running its popular trivia game, Azarus Challenges, for the past three years as a Twitch Extension, which has accumulated more than four million viewers participating and more than $2 million in prizes distributed.

“Streams are so much more than TV, offering a deeper level of engagement between content creators and fans,” Azarus CEO and founder Alex Casassovici said. “Our new platform creates a win-win scenario for streamers everywhere and the brands who need a natural way to connect with fans. This interactivity reveals the true nature of streams.”

Azarus can now be used on any streaming network, allowing for more diverse gameplay and offering brands an opportunity to sponsor Overlay Game sessions to connect with fans in a playful and engaging way.

Starting today, you’ll be able to play a tailored trivia game, with the creator as a host, quizzing fans on the lore of the latest expansion to Brawlhalla’s universe. Through a series of three trivia question sets that will be updated daily, fans will be tested on their knowledge and speed to answer questions, determining how many AzaCoins will be won.

Azarus sets itself apart by creating the first platform that turns streams into massively real-time multiplayer digital arenas. The platform connects brands, creators, and audiences through games that magically appear over streams that the audience is already watching. Brands sponsor games using a real-time performance model, which offers them a unique platform to engage more deeply with audiences while simultaneously rewarding them. Likewise, creators enabling this connection by launching brand-sponsored games get rewarded with AzaCoins based on the level of audience engagement they drive during their streams.

“We are seeing very strong demand from ad agencies and brands who are eager to activate on our new platform. They’re excited to run massively interactive ads, delivered at scale via our network of creators, paying only when a recognized user engages, all while creating a positive experience for both creators and their fans,” adds Torry Stanley, VP of Finance & Revenue Operations at Azarus.

The Azarus platform will bring more games and more innovative gameplay, available for brands to sponsor and for creators to run on their channels, on Twitch and other streaming platforms.

Creators can join today by signing up at https://azarus.io.

Azarus (https://azarus.io) is the pioneer of Overlay Games, a new form of casual games that layer over streams. Overlay Games are massively multiplayer, simple, fun, and rewarding. Azarus offers the first platform that provides an environment to build, distribute and monetize Overlay Games on any stream. Overlay Games bring together massive live audiences, revealing the true nature of streams as an interactive medium, supporting the company’s vision that “Streams are not TV.”